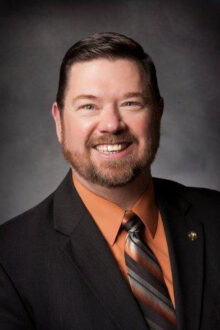 Bill was born in Washington, Pennsylvania. Bill and his wife, Cindy, were married in 1976 and have two sons (Bill, 33; Steven, 31). He attended Walla Walla College in Washington State, receiving a Bachelor of Science in Medical Technology in 1979 with a minor in Chemistry. Bill furthered his education and in 1989 received a Master of Arts degree in Business from Webster University.

He is now credentialed as a Fellow in the American College of Health Care Executives and served as the ACHE Regent for Wyoming from 2012-2015. Bill is also licensed as a Nursing Home Administrator. Bill “rose through the ranks” within the hospital environment, beginning as an evening shift medical technologist before serving as the Administrative Director of three Denver area hospital clinical laboratories.

Bill began his career in hospital administration in Julesburg, CO. where he served as the CEO/Administrator of Sedgwick County Health Center (hospital, nursing home, doctors’ clinic, and assisted living center). He then served as the CEO/Administrator of Sitka Community Hospital in Sitka, AK, a small fishing/tourist community in south-east Alaska, before moving to Libby, MT in February 2005 to the position of President/CEO of St. John’s Lutheran Hospital (now Cabinet Peaks Medical Center). During his tenure in Libby, Bill oversaw the development of construction and financing plans for a new replacement 25-bed hospital.

In his spare time he enjoys working in his shop (auto mechanics and home repair). Cindy and Bill enjoy golfing, camping, attending NASCAR races, and visiting their family, including their new grandson Wyatt.