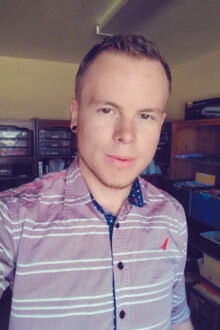 Drew grew up in Los Alamos, New Mexico spending much of his formative years roaming the canyons that sprawl across town and the verdant slopes of the surrounding Jemez mountains. He has lived around the state, doing stints in Santa Fe, Las Cruces, and Taos. Drew is currently pursuing a degree in Nursing. In his free time, he enjoys exploring the untamed countryside of New Mexico, outings to the city, and kicking back at home. Drew has traveled to a number of countries around the world and revels in the prospect of a new adventure. He could not survive long though without street tacos or green chile cheeseburgers.

Drew took the position of Data Coordinator for First Steps in 2014 after first working for the program as an Administrative Assistant. He is certified in the FAN (Facilitating Attuned Interactions) level II, as a facilitator of Circle of Security, and as a Medicaid Determiner. Some of his unofficial titles include Mr. Sunshine and Dr. Strong.